Słowiński National Park is a national park in Pomeranian Voivodeship, northern Poland. It is situated on the Baltic coast, between Łeba and Rowy. The northern boundary of the park consists of 32.5 kilometres of coastline.

Forests in the park are mainly made of pines. These trees cover 80% of wooded areas, there are also peat bogs of several types. Of animals, the most numerous are birds with 257 species. This is because the park is located on the paths of migrating birds. They feel safe here because human activities are limited. The most interesting species are: erne, eagle owl, crow, swan and various kinds of ducks. Among the mammals, there are deer, wild pigs and hares.

There are around 140 kilometres of tourist walking trails. Beside the lakes are observation towers and along the trails one can find benches and resting places. Around the park there are many parking sites as well as hotels and camp sites, especially in Łeba.

A Lighthouse in Stilo

You need to visit a lighthouse in Stilo near Sasino. When you rent the comfortable house in Goat Hill close to Leba, it is a good opportunity to go and see one of the biggest attractions while by the Polish sea – the lighthouse in Stilo.

The lighthouse was lit for the first time in 1906. The name comes most probably from the name of two brothers Edward and Gustaw Stielow from Łeba. The last German lighthouse-keeper was P.Prutz, who was on duty there until 1945. Nobody knows what happened to him after that year. One of the 3 people that service this lighthouse is a lady called Weronika Łozicka. It is unique enough, since there are only 2 women lighthouse-keepers in Poland.

The lighthouse in Stilo is situated 3 km from a charming village called Sasino; you can go there and see a beautiful palace from 1862. To get to the lighthouse, you need to walk through the forest for 1, 5 km (leaving your car in a car park). The view that spreads from the lighthouse is a sure reward for the climb up the steep stairs – all you see is green stretch of forests, quick sands In Leba and the Sarbsko lake. 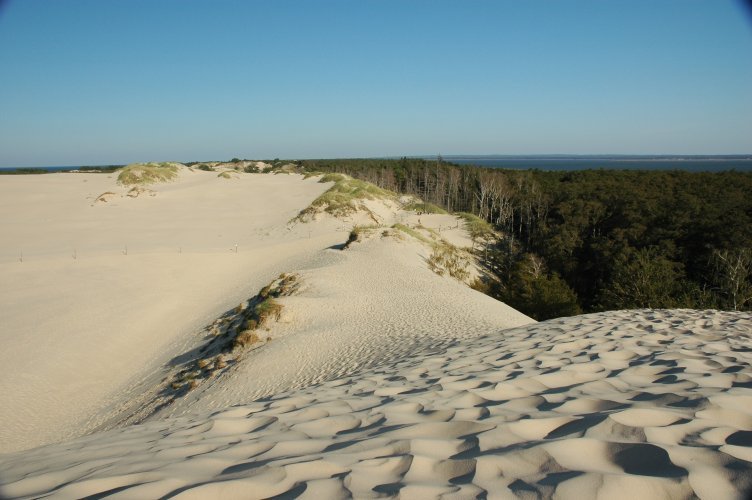 Trips to the quick sands in the Slowinski Park Narodowy are something that stays in your memory for ever… There are travelling sand dunes, known as quick sand, unique in the European scale. The sand that the wind carries covers the live seaside forests, and the sand even tries to get to the human habitats. To stop this process most of the dunes were afforested –a lighthouse of Czołpino is situated on one of them.

The sand dunes that are on the Słowiński Park Narodowy /The Slovinski National Park/, because of its desert-like character, are also called “the Polish Sahara desert”.

This incredible and unique scenery is only 6 km from Leba, so 20 km from Goat Hill, if you travel by car or 16 km by bicycle. If you take a car, the distance of 3, 5 km in the beginning of the route goes on picturesque forest roads by the seaside, then you go on a rather solitary tarmac road, running through a forest and seaside meadows towards Nowęcin and Leba. The way that Goat Hill, our summer residence, is situated gives you a perfect chance to go to this land of sand, wind and water, that is to the Quick Sands near Leba.